The world of vertebrate paleontology has been abuzz over the past week about the pending sale of 12 fossil vertebrate to the highest bidder. What was different about the auctioning of these fossils, compared to other fossil sales, is that they were being sold by a public museum.  The San Diego Natural History Museum de-accessioned 12 vertebrate fossils to sell at auction - meaning they would most likely be sold into private collections where they could no longer be used for education and science. Please see my previous post for more information on the significance of these fossils and why the sale of them would have been devastating to natural history museums, professional paleontologists, and our communities.

In this light, the good news just broke that the San Diego Museum Natural History Museum has pulled all of its fossils from the auction. In their official statement, SDMNH states:


"The San Diego Natural History Museum has made a decision to withdraw the 12 fossils listed for sale in the Bonhams public auction scheduled for November 19, 2013 ... By withdrawing the specimens from the auction, and in light of the recent interest shown by numerous institutions in these fossils, we will be reevaluating how to proceed. This will allow us to revisit alternative strategies that would allow the fossils to remain in the public trust."

A large outcry of concern from the paleontology community as well as the general public, has resulted in the preservation of these historically and scientifically significant specimens.  Thank you to everyone who joined your voices together to let the SDNHM know the implications of their actions - from the paleontologists who led the charge, to the western Kansas community members who grew up with a love and respect for our natural history. It has been wonderful to see professionals, amateurs, students, museum patrons, and concerned citizens stand on the same side of an important issue.

** As an aside, although the San Diego Museum has not decided how to proceed with keeping these fossils in the public trust, the Sternberg Museum has let them know that our offer to accept their Charles Sternberg collection is still on the table. **

An Open Letter to the San Diego Natural History Museum

On November 19, 2013 the San Diego Natural History Museum (SDNHM) is set to sell 11 fossils on public auction through Bonhams. Six of these fossils were collected by Charles H. Sternberg from the chalks of western Kansas (note that the Canadian chasmosaur dinosaur skull has been withdrawn from auction), and so have significant historical and scientific value. Specimens like the large Xiphactinus have been studied by researchers and been included in scientific publications. The selling of fossils is a direct breech of the Society of Vertebrate Paleontology's code of ethics. On the subject of commercial sale or trade, the Member Bylaw on Ethics Statement reads:

"The barter, sale or purchase of scientifically significant vertebrate fossils is not condoned, unless it brings them into, or keeps them within, a public trust. Any other trade or commerce in scientifically significant vertebrate fossils is inconsistent with the foregoing, in that it deprives both the public and professionals of important specimens, which are part of our natural heritage."


Below is the letter I sent to the SDNHM expressing my concern over the sale of fossils. This is not a matter of amateur vs. professional paleontologist, or even commercial collecting, but is about the role of museums in safeguarding our natural history collections.  For a public, federally recognized repository to sell fossils into private collections (sadly, museums just don't have the financial resources to purchase fossils) violates the very essence of a museum. If sold, these spectacular specimens will be lost from public education and scientific research forever.  This is a crucial issue for paleontologists, museum professionals, and members of our community who trust us to care for and preserve our human and natural history heritage.

Please feel free to leave comments on this thread and/or share this thread with others.  If you wish to send comments directly to the San Diego Natural History Museum speaking out against selling these fossils, you can contact them here.

Thank you for your concern,

**It should be noted that the decision to sell these fossils was not made by paleontology or science staff at the San Diego museum, but by the Museum President, Board of Directors, and other administrators. 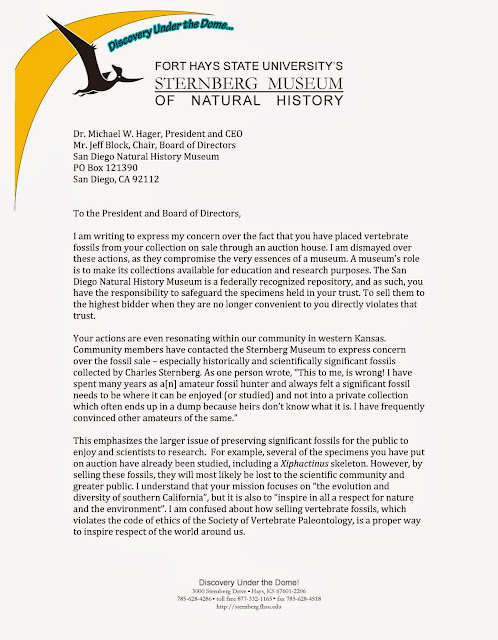 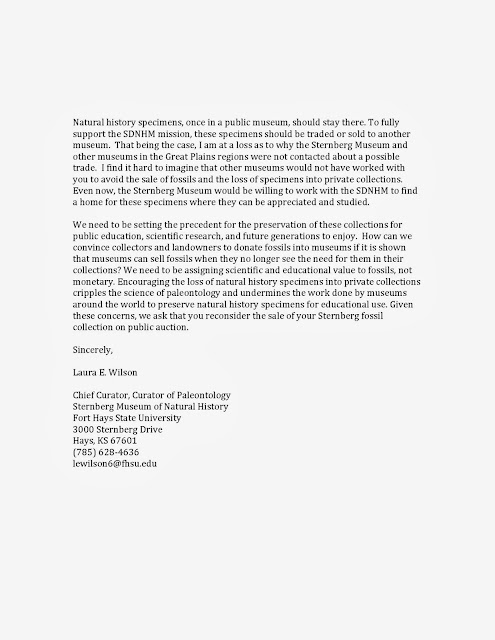 Posted by Sternberg Museum, Fort Hays State University at 9:50 AM No comments:

From October 30 to November 2, paleontologists from around the world came together for the Society of Vertebrate Paleontology annual meeting. Professors, curators, students, and other paleo aficionados descended upon the unsuspecting city of Los Angeles, California.  Conferences are always a fun and exciting mix of hot-off-the-press science, visiting with old friends, making new connections, developing new research projects, and late night schmoozing.

SVP conferences are filled with scientific talks by top minds in the field, followed by afternoon poster sessions for more discussions on new research.  Evenings allow for a time to take scientific conversations and catching up with friends into a more casual atmosphere. Many of us were there not only to learn, but to educate as well.  Ian presented a poster on preliminary results from his Master's project: "Thermoregulatory status of mosasaurs from the Western Interior Seaway of Kansas, USA". Mackenzie and Melissa both had poster presentations showcasing undergraduate research projects completed at Indiana University and UC Santa Barbara, respectively. In her research, Mackenzie used modern analogs to help study fossils. Her poster explained "Hind limb morphology of carnivorous birds: A morphometic analysis of prey preference and predatory techniques".  Melissa brought us into the world of giant ground sloths with a poster on "New Pleistocene megafauna localities in Santa Barbara County, California: Paleontological reconnaissance of the marine terrace deposits at Vandenberg Air Force Base."

David gave a talk on his Master's research from Oklahoma State University, "Of multituberculates and mass extinction: Evidence of selection for small body size within the Cimolodonta (Multituberculata) across the Cretaceous-Paleogene extinction boundary, followed by morphospace recovery and expansion in the earliest Paleogene".  A mouthful, but an interesting look at body size change in a group of mammals during the extinction event that killed off the dinosaurs (or at least the dinosaurs that weren't birds).  Lastly, Dr. Bennett presented a poster on the enigmatic pterosaurs, "Reinterpretation of the wings of Pterodactylus antiquus based on the Vienna specimen".

Another noteworthy event at this year's conference was in the awards ceremony. Every year at the award's banquet that closes the conference, SVP gives out research grants and awards of recognition to students, paleo-artists, and professions alike. One of these is the Romer-Simpson Medal, "awarded for sustained and outstanding scholarly excellence in the discipline of Vertebrate Paleontology".  This is the society's highest award. This year's Romer-Simpson medal was awarded to Dr. Jack Horner, Curator of Paleontology at the Museum of the Rockies in Bozeman, Montana. This hits particularly close to home because Jack was Dr. Laura Wilson Master's advisor and mentor since entering the field of paleontology. Laura and her students (technically, Jack's grand-students) have a huge legacy to live up to and pass on to the next generation of scientists.

Between presentations on cutting edge science, discussions with colleagues, student recruitment, catching up with old friends, making new friends, gorging on ethnic food, and visiting local museums, SVP 2013 was a successful meeting for all! I hope everyone is starting to save for SVP 2014 in Berlin, Germany!
Posted by Sternberg Museum, Fort Hays State University at 8:31 PM No comments: