Titans of the Ice Age: When Big was Cool

We have a new exhibit at the Sternberg Museum of Natural History! 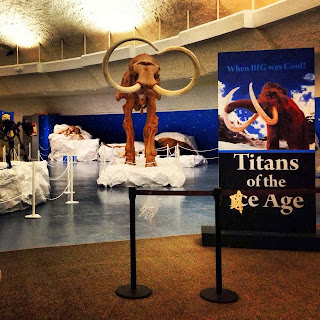 Last Saturday, December 14, we opened Titans of the Ice Age: When Big was Cool!  This new exhibit was built by Sternberg Museum staff and features information about Ice Age mammals. The last ice age took place during the Pleistocene Epoch, which lasted 2.6 million years ago to 10,000 years ago.  During this time, large portions of Earth's surface (up to 30%) was repeatedly covered by glaciers, and then uncovered when glaciers retreated as climate warmed.  Many of the animals that lived at this time are referred to as the Pleistocene Megafauna because they were bigger than their modern descendants.

This new exhibit explains why the climate was colder during the Pleistocene and why many of the animals were bigger. It compares extinct Ice Age animals to their living descendants and discusses the current scientific hypotheses surround the extinction of the Megafauna around 10,000 years ago.

This new exhibit showcases Pleistocene animals next to their modern counterparts, demonstrating the changes in size, ecology, and behavior within different mammal lineages.  Bison latifrons (the long-horned bison), Panthera atrox (the North American lion), and Mammuthus columbi (the Columbian mammoth), and Arctodus simus (the short-faced bear) are just some of the animals on display.  These animal are distinctly different from their modern relatives.  Understanding these differences is important for scientists, policy makers, and anyone concerned about the future of our ecosystems given ongoing global climate change.

Kansas is well known for our Cretaceous Seaway fossils like mosasaurs, plesiosaurs, sharks, and sea turtles, but we also have a record of the animals that roamed the grasslands at the edge of the ice sheets during the Pleistocene.  Mammoth, horse, bison, camel, and sloth skeletons can be found in gravels and other glacial deposits around the state.  With the unveiling of this new exhibit, we are finally able to tell the stories of the animals that lived not too long ago, but during a time that was characterized by extreme changes in the climate and landscape.

Titans of the Ice Age: When Big was Cool will be open for the next year and is part of a series of exhibits the Sternberg Museum will be building and opening over the next few years.

Come discover what's under the Dome!

TITANS OF THE ICE AGE:
When Big Was Cool


By comparing fossils from the most recent Ice Age with their modern descendants, this new exhibit showcases some of the Megafauna that used to roam North America. 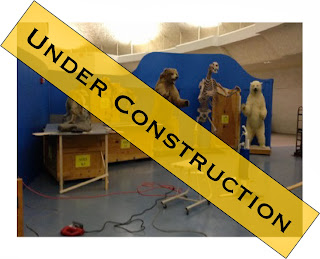 The Museum members-only opening is 10am - Noon on Saturday.*
The exhibit opens to the public at NOON on Saturday.

Come visit the Museum if you're looking for something to do with the family, an escape from the cold, or to do some holiday shopping at the Excavations Gift Shop!

*Members-only opening includes a guided tour of the new exhibit, Q&A with Museum staff, and refreshments.  If you want to become a member, membership registration will be available on-site Saturday morning.

UPDATE: KSN aired a nice segment on the new exhibit opening.  Thanks, Molly Hadfield and KSN!