You're doing WHAT to those bones?

Fossils are not renewable resources.  While there is the potential that animals alive today may become fossils when they die, there are a finite number of T. rex and Smiledon (saber-tooth cat) fossils out there. Once an animal goes extinct, no more fossils of that animal can form.  This means that every fossil is precious to a paleontologist because it offers a unique glimpse into the biology, ecology, and evolutionary history of an extinct organism. Since people first understood that fossils are evidence of past life (which dates back to the mid-1600s and the work of Robert Hooke and Nicholas Steno), naturalists studied these biological remains by examining their size, shape, and similarities and differences to other fossil and living organisms. Given the scientific value of each specimen, it may be surprising to know that some researchers undertake destructive analysis (meaning they permanently alter bone) as part of their research methods. So why would paleontologists charged with preserving fossils into perpetuity do anything that would permanently alter a fossil? What information could be so important?

Histology is the study of tissue, and osteohistology is the study of bone tissue. Medical doctors and veterinarians study soft tissue and bone samples to look for disease, abnormalities, etc.  Paleontologists study bone tissue to look for evidence of the life history of an extinct animal. Only in the past few decades have paleontologists come to understand the wealth of information that can be gained from studying bone tissue. The internal microstructure of bone tells us about how an organism grew and how intrinsic and extrinsic factors affected how an organism grew.  Specifically, evolutionary relationships (phylogeny), age of the organism (ontogeny), how the animal used the bone (biomechanics), and environment directly influence bone growth. How an animals grows then tells us specifically about the life history of that animal: rate of juvenile development, age of sexual maturity, growth rate, etc.. To study bone tissue on a level that gives us useful information, one looks at just a thin sliver of the bone under a microscope.  This requires cutting a chunk out of the middle of the bone, gluing it to a slide, and grinding it thin enough so light shines through the bone. Of course we photograph, measure, and make replicas (molds and casts) of the bone before cutting, but this process obviously permanently alters a bone.

Ultimately, justifying the time, effort, and destruction of cutting a bone is simple: looking at the internal structure of bone gives us information than we cannot gain just by looking at the outside of the bone (at least with current technology). Inside every bone is a network of vascular canals, osteocytes, collagen fibers, and other microstructures. Vascular canals contain vessels that carry blood and nutrients through the bone; these canals come in different shapes and sizes. Osteocytes are the cells that deposit new bone tissue; collagen fibers (made of proteins) are the organic portion of bone tissue and may vary in how well or poorly organized they are within the bone matrix.  Importantly, many of these features have been experimentally shown (using living species) to be related to growth rates. Other features like lines of arrested growth (LAGs) show when bone pauses growing and have been shown to be deposited annually.  And amazingly enough, these features are preserved during fossilization so that fossil bone microstructure can be studied just like modern bone microstructure. (It should be noted that actual osteocytes - the cells - are not fossilized, rather the space they occupy in the bone (termed osteocyte lacunae) are preserved.)

By studying how modern animals grow, and looking at their bone microstructure, we can understand how features like vascular canal density (canals/unit area), vascular canal orientation (radial, transverse, reticular, etc.), osteocyte density (osteocytes/unit area), osteocyte shape (globular or elongate), and collagen fiber orientation (well organized or poorly organized) relate to growth rates and metabolism. For example, high vascular canal density and unorganized collagen fiber orientations are associated with rapid growth rates; conversely, few vascular canals in well-organized collagen fiber matrix is associated with lower growth rates.  Using what we know about living animals to interpret and predict the biology, ecology, and behavior of extinct animals is an important aspect of paleontology. Armed with this knowledge of bone growth in living animals, paleontologists can begin to study the metabolism, effects of locomotion, effects of climate, and aging process of extinct animals. Bone histology is also the only way of knowing the age of an individual (extinct) animal at the time of death. 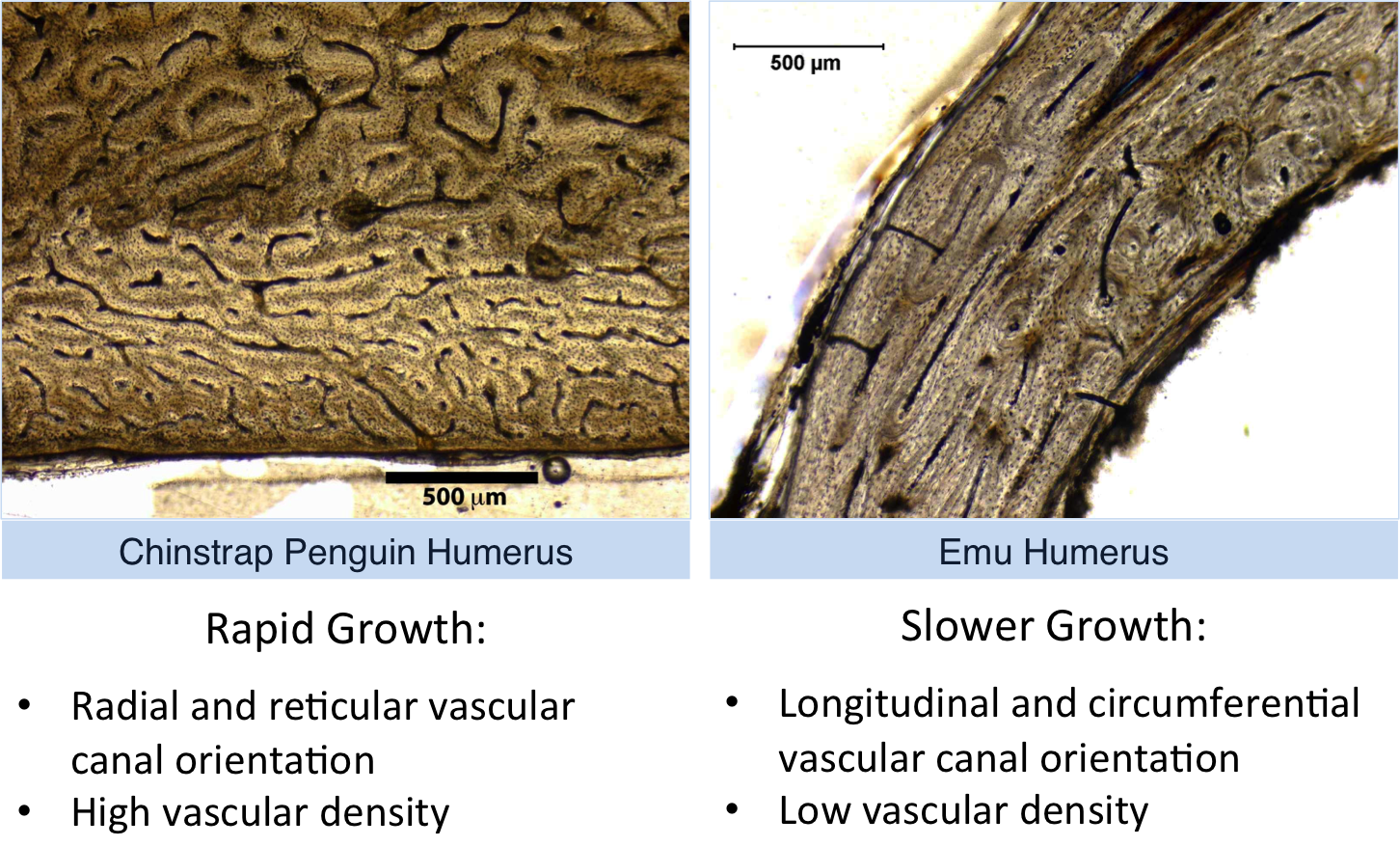 Histology is often the focus of studies pursuing a better understanding of ontogeny, paleoecology, and behavior. Even descriptions of new species often include bone histology. Knowing that an animal is an adult (and has completed development and growth) is important when describing a new species. Studying bone microstructure is the only way to determine if an animal had reached skeletal maturity by the time of death - in other words, whether the animal was an adult at the time of death. Because of all we can learn from fossils by cutting them open, histology is a rapidly growing field in paleontology. We are at a point where very few (at least in my experience) paleontology curators and collection managers (those who permit access to fossil for research purposes) don't permit researchers to section at least some bone for histology research.

Studying the internal microstructure of bone is a research trend that isn't going away any time soon - and this is a good thing.  There is too much valuable information yet to be uncovered that can come from studying bone growth. As one of my primary research focuses is on osteohistology, I sometimes find myself getting defensive when explaining my research to a lay audience. I feel that I need to justify why destructive analysis (or permanently altering bone, which sounds at least a bit more innocuous) is important. Luckily I have generally found that explaining the range and depth of information that can be gained from histology is very effective in relaying the significance of this research. Perhaps this research method doesn't seem so destructive when you consider how much information can only be gained by cutting open bone. Knowing that we make replicas of everything we sample also helps.

So while paleontologists work hard to preserve fossils, the goal of preserving them is to use these fossils for education and research.  Sometimes the quest for knowledge requires seemingly unconventional research methods. Histology has opened our minds to how extinct animals grew from hatching/birth to adulthood, how these animals responded to their physical environment, what their metabolism was like. It has also provided valuable information about the growth and development of modern animals! Bone microstructure has provided information that we could not imagine knowing just a few decades ago. It may seem paradoxical to alter bone to advance the science of paleontology, but in the case of bone histology, I feel it is clear that the ends justify the means.
Posted by Sternberg Museum, Fort Hays State University at 10:51 AM No comments: