The end of the year is always a good time for reflecting on recent accomplishments - especially since I am writing the Sternberg Museum Paleontology Department's annual report. 2015 was a great year for paleontology at the Museum, with exciting plans on the horizon. 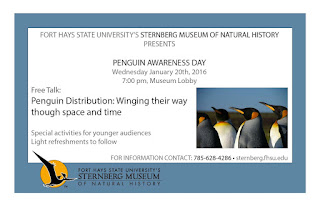 We continued established traditions like celebrating National Fossil Day (October), and added new annual programs like Penguin Awareness Day (January) and Darwin Day (February).  Our attendance numbers for these events are growing, showing that we are reaching more and more people with science education.  Perhaps rather selfishly, these events also allow me to celebrate things I'm passionate about: the history of science, evolutionary theory, the importance of preserving and studying fossils, and cute penguin pictures. Over the summer, Sternberg Museum Education Director David Levering led a tremendously successful second year of summer science camps.  Paleontology continues to play a large role in the elementary, junior high, and high school camps. 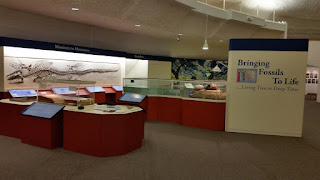 In April of 2015 we also had the excitement of opening a new permanent exhibit in our main exhibit gallery. "Bringing Fossils To Life" is an engaging exhibit pairing living organisms with fossil counterparts to teach various aspects of evolutionary theory.  Fossil tortoises are exhibited with living African spurred-thigh tortoises to demonstrate evolutionary stasis; living sassafras trees are paired with fossil leaves that were originally (mis)identified as sassafras to demonstrate convergent evolution; a fossil mosasaur from Kansas is compared to a living Merten's Water Monitor to illustrate functional morphology; and we have live salamanders and mudskippers displayed with fossils salamanders to explain how animals transitioned from water to land.  The mudskippers are pretty damn cool. 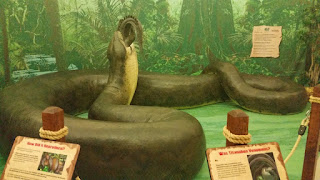 The Museum also hosted "Titanoboa: Monster Snake" as our summer traveling exhibit. Titanoboa was a 60 million year old, 48 foot long fossil snake found in Columbia.  The excellent, and very well received exhibit details the story of the discovery of the fossil and what we have learned by studying this beast's fossil remains and ecosystem.

As always, new science made headlines for the paleontology program at the Sternberg Museum and Fort Hays State University.  My students and I attended multiple conferences where we had the opportunity to present novel research to the scientific community. Seven graduate students and I drove to Pittsburg, Kansas for the Kansas Academy of Science annual meeting, where six of us gave presentations. Adjunct Curator of Paleontology Michael Everhart was the 2015 president of KAS and put on a fantastic conference (as well as gave a talk). Two of my students successfully defended their MS theses over the summer, and I had the opportunity to present new pterosaur histology research at the International Symposium on Paleohistology in Bonn, Germany.  We rounded out the year of conferences by attending the 75th annual meeting of the Society of Vertebrate Paleontology in Dallas, Texas. A huge contingency from FHSU showed up, with many of us presenting research. Recent MS graduate Makenzie Kirchner-Smith and I gave talks.  Mike Everhart presented a poster. Recent grad Josh Fry and finishing MS students Kelsie Abrums and Melissa Macias presented posters, along with current MS students Tom Buskuskie, Logan King, and Patrick Wilson. Recently hired (and finishing FHSU grad student) Outreach Coordinator Ian Trevethan also presented a poster. Four first year graduate students (Cyrus Green, Mariah Towell, Jessica Barnett, and Darrah Jorgensen), two undergraduate students (Kris Super and Ted Vlamis), and David Levering attended, as well. 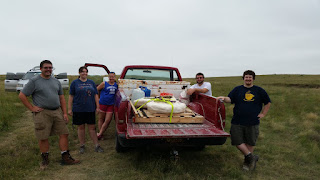 My students and I also had several opportunities to get outside during the spring, summer, and fall of 2015 and dig up some fossils! Excavations recovered fossils from Cretaceous, Miocene, and Pleistocene deposits of western Kansas. Additionally, Darrah and I were able to work with David Levering and his High School Paleontology Camp to teach paleontology excavation techniques. 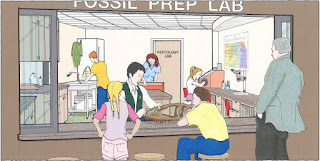 Let's just say I'm extremely excited for what we have planned for our headlining events of 2016 so far.  In addition to continued programming like Penguin Awareness Day, Darwin Day, and National Fossil Day, we will be heading up a new capital campaign. The main campaign goal for the paleontology program at the Sternberg Museum of Natural History is to build a new paleo prep lab. This includes renovating and expanding the current lab, creating new research space, improving health and safety conditions for our preparators, and updating equipment.  Our goal is high ($150,000), but we're excited about the project and the potential for increased paleontology opportunities for students, visitors, volunteers, and scientific research.

World famous paleontologist Dr. Jack Horner from the Museum of the Rockies in Bozeman, Montana will be visiting us in April to help with our fundraising efforts. In addition to decades of scientific innovation and education, Jack is also the technical advisor for the Jurassic Park movies. So keep a look out for news about Jack's visit, public talk, and the first annual Sternberg Museum Spring Gala! (And let me know if you would like more information about the fundraising campaign!)

2015 was a huge success and we expect even more excitement in 2016. We hope to see you at the Museum!