Darwin Day: It's for the birds

Birds have played a large role in understanding the origin of species.  Birds are abundant and diverse, with some great examples of over-the-top plumage and behaviors. Knowing what we know now about evolutionary mechanisms, it's easy to see why birds continue to be model organisms for studying natural selection, sexual selection (a sub-category of natural selection), behavioral ecology, and ecologic health.   Birds also played a significant role in providing examples of change for early naturalists, like Charles Darwin, who were looking for the mechanisms to explain how organisms change through time.

Charles Darwin published On The Origin of Species by Means of Natural Selection in 1859 (Darwin removed "On" from the title after the first edition), revolutionizing the way we think about the natural world. He wasn't the first one to think that species slowly change over time, morphing from one form into the next; many naturalists who came before him were also searching for the secrets to "transmutation" (the term used before people understood what caused species to change). For example, Jean-Baptiste Lamarck (1724-1829) thought that characteristics changed between generations of organisms because of use or disuse; and these changes were heritable.  The classic example of Lamarkian evolution was a giraffe stretching its neck throughout its life to reach higher leaves, and the giraffe with the stretched neck had offspring with a longer neck. Essentially, Lamarck's idea of acquired characteristics stated that behavior could drive evolutionary change. Although Lamarkism has been falsified (though the new field of epigenetics may eventually vindicate Lamarck), his ideas are important because he was the first to come up with a mechanism to drive evolutionary change. It wasn't until decades later that the correct mechanism was identified: natural selection. 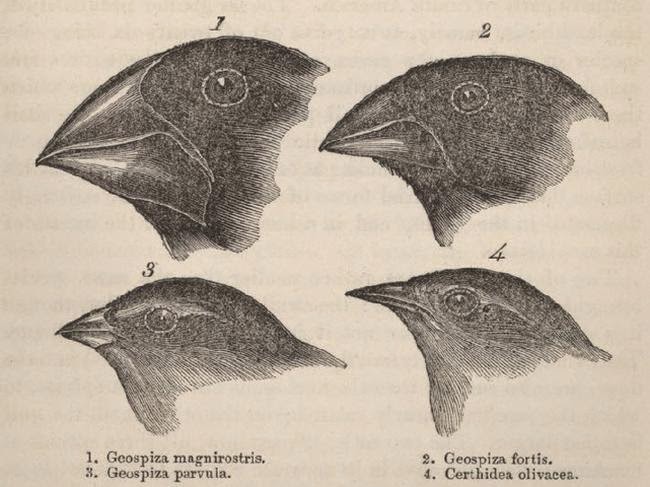 Natural selection is the process by which characteristics become more or less common in a population based on whether the characteristic provides an advantage or disadvantage to the survival and reproduction success of an organism in a specific environment. Darwin and his idea of natural selection are quickly associated with Galapagos finches. When Darwin was traveling aboard The Beagle, he spent time observing and collecting finch species on the various Galapagos islands.  Textbooks and popular science articles tell us that the differences in beak sizes and shapes between populations on various islands made a huge impact on Darwin when he was figuring out why species changed. However, finches are never mentioned in The Origin of Species. In fact, they're only passingly mentioned in his journals.  The truth is, Darwin never fully realized the importance of variation among Galapagos finches in light of natural selection. He actually didn't label his collections while on The Beagle and later had to figure out which birds came from where (a lesson on the importance of always keeping good field notes!). In fact, the term "Darwin's Finches" wasn't applied until 1936 (and made popular in 1947).

Despite the lack of realization on Darwin's part, Galapagos finches have played a large role in our understanding of natural selection. The huge bulk of work by Peter and Rosemary Grant (40 Years of Evolution and The Beak of the Finch are two great summaries of their research) demonstrate evolution in action.  Evolution is commonly touted as a process that takes place over long periods of time; those too long to be observed by individuals.  The Grant's research changes that idea. Rather, their life's work shows that variation in beak size and shape within a single finch population can change significantly from year to year based on environmental factors. The amount of rainfall influences the food supplies; beak size and shape determines which seeds and nuts can be eaten by an individual; so the survivorship of individuals in the population is based on who has the beak morphology that can crack the seeds that are produced, which varies depending on annual precipitation. These observations have been strengthened by the addition of genetic data - tracing gene flow and genetic variation within and between finch populations.

A Pigeon Fancier, You Say?

Birds still played an important part in Darwin's theory.  But it was a different group that influenced Darwin's ideas on natural selection: pigeons. Charles Darwin was a pigeon fancier. The Victorian Period (1830-1900) was known for it's Cabinets of Curiosities. These were for people to display their collections, and people loved to collect and display all sorts of natural history items - fossils, exotic skins and furs, artifacts, etc.  People extended their curios to live animals, as Victorian England also saw an increased interest in animal husbandry and breeding. Collections of cattle, dog, sheep, and pigeon breeds were common. But Darwin wasn't just a collector and keeper of pigeons, he turned his pigeons into an experiment.  He found that he could take one species, Columba livia, and, through selective breeding, breed hundreds of varieties.  By choosing which male pigeon mated with which female, he could study how variation could be introduced into a population, and how specific variable characteristics could be passed from one generation to the next.  It was these observations during pigeon breeding - artificial selection - that he could articulate how the environment could drive changes in the wild - natural selection.


Unlike finches, which never made it into The Origin of Species, pigeons made the cut and took center stage.  Darwin opens his book (or "abstract", as he put it since he intended to publish many volumes) with a chapter on domestication. The fact that his seminal work begins with domestication, not variation in nature, was a huge surprise to me the first time I read The Origin of Species, but it makes perfect, beautiful sense. Artificial selection is the key to Darwin convincing readers of his ideas. By the end of Darwin's book, he has laid out a series of logical steps that takes the reader from relatable experiences into the whole of nature:

An important aspect of natural selection is sexual selection - where reproductive success is a result of an individual's success in securing a mate (rather than avoiding death before reproducing). As Darwin states in Chapter 4 of The Origin of Species,

"[Sexual selection] depends, not on a struggle for existence, but on a struggle between the males for possession of the females; the result is not death to the unsuccessful competitor, but few or no offspring."

To emphasize this point, Darwin invokes examples from peacocks and birds of paradise. Birds are textbook examples of sexual selection. Many male species have flamboyant plumage and intricate courtship rituals they use to attract female partners.  In the case of birds of paradise, male plumage would obviously make them more obvious to predators, but it would seem that the drive for mate selection out-weighs pressures from predators.  Another example (perhaps a bit closer to home) is the cardinal. Males have evolved bright red plumage to help them attract mates, while the females are more drab to help with camouflage. If female cardinals are choosing mates with the brightest plumage (as a sign of their vitality), then the genes that control bright colors in males are being preferentially kept in the population.  Darwin expands on his ideas of sexual selection in The Descent of Man and Selection in Relation to Sex (1871). A Celebration of Birds


The connection between Darwin and birds and his articulation of natural selection is undeniable.  Since 1859, evolutionary theory has grown.  While natural selection is still a driving force of change, we have added to that the knowledge of genetics and mutations. Despite additions to Darwin's original idea, birds have continued to play a significant role in the past 156 years of research supporting evolutionary theory.  And it's time to celebrate! 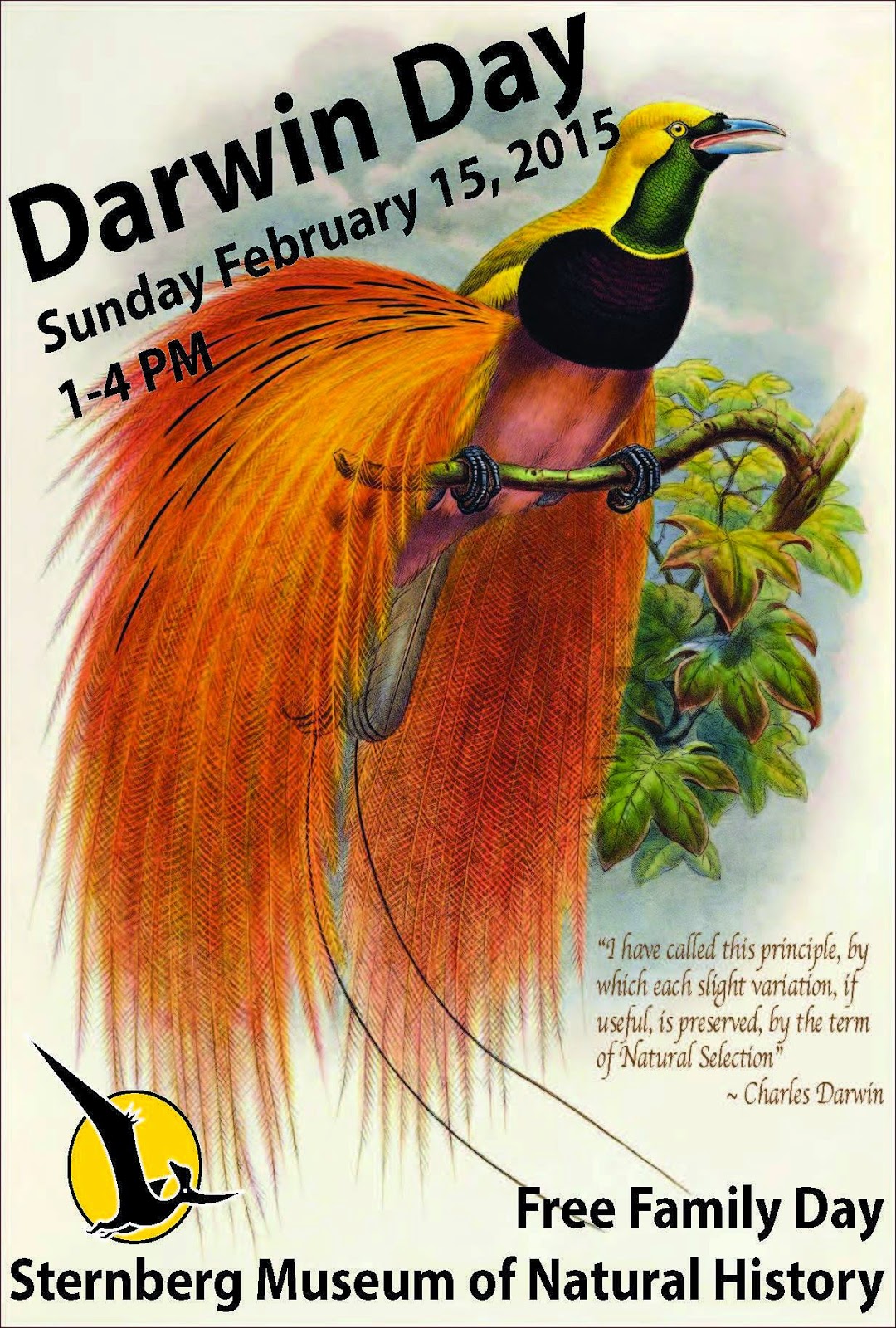 This year, 2015, we are excited to host our first Darwin Day celebration at the Sternberg Museum of Natural History!  Darwin Day is held on or around Darwin's birthday - February 12.   Choosing a theme for our first Darwin Day didn't prove to be as difficult as we feared. In this year's event, we are celebrating the huge impact birds and bird research has made on our understanding of evolutionary theory. Avian analogies are fantastic for hands-on lessons on natural selection, sexual selection, camouflage, ecosystem structure, sexual dimorphism, observing patterns in nature, and unique adaptations. And we can't wait to share this with the community!
Posted by Sternberg Museum, Fort Hays State University at 1:44 PM No comments: