Sternberg Museum of Natural History Education Director, David Levering, lead a spring break study abroad trip of seven Fort Hays State University undergraduate students to mainland Ecuador and the Galapagos Islands.  The students documented their adventures and explorations during the trip, and these travelogues will be featured here through a series of eight posts (with a finally reflection from David). Enjoy!


One of the things the group was looking forward to the most was the bike trip. We had to be up and ready to go by 7:00 AM. The bike tour service came and picked us up to take us to back side of Pichincha, where the tour would start. Pichincha is an active stratovolcano that is covered by forest. When looking at the different peaks, it was hard to differentiate between other mountains and the volcano because of the cloud forest surrounding it. If I was not told Pichincha is a volcano, I would have just thought it was just another mountain, because of all the forest around it. As we were driving to the drop-off point, we drove through an area that was definitely poorer
than the inner city of Quito. The people were living in small concrete block-shaped buildings, which made up shops and homes. The day before we walked around the entire city of Quito and saw the city life. As soon as we get outside of the city, on the eastern slope towards Mindo away from Quito, the demographics definitely changed. This reminded me of my trip to Chimbote, Peru where everyone was living in makeshift buildings made from woven plant material and posts. It was a definite culture shock. One thing I noticed after we started the tour was trash had been thrown down the hillside like it was a dumpster. I also noticed that it looked like most of the locals made a living through agriculture. As we rode around, we saw a considerable amount of domestic animals, mostly dogs. Along the trail we also saw some farm animals, including chickens and horses in some sections, and cows which were grazing cleared out pasture areas. 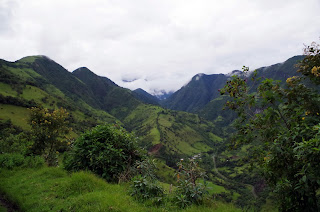 The first 10 kilometers were mostly downhill on pavement and the view was breathtaking. We were able to look out and see the mountains and cloud forest. It was amazing to look down the hill and see what we were about to ride our bikes through. Sometimes it would be wide open and clear, other times it would be a thick forest. We made it to a town called Nono before we had a two kilometer uphill climb. Even though the climb was only two kilometers, it was a very rocky and physically demanding. The lack of oxygen took a toll on my physical ability. We were about 10,000 feet up, a definite change from Kansas. The last 25 kilometers was mostly downhill on a road through the cloud forest. This portion was more diverse than the first 10 kilometers. This part of our bike ride had a lot more plant life from small flowers to big trees. This was a forest for sure but we had not reached the cloud forest yet. The road was very muddy and rocky. I felt like I was actually mountain biking for the first time. We were all splattered with mud head to toe. Everywhere you looked was either forest, waterfall, or rock features. When I looked at these different parts of the forest, it is amazing to see something naturally made over time.

Along the trail we passed a religious building called Virgen del Camino. The tour guide informed us that at certain points of the year many locals will come to this building to worship. Along the trail there are several waterfalls and geologic features such as dormant basalt flows. As a geology student, I thought seeing these dormant basalt flows surrounded by an active volcano was very interesting. I get to see pictures of different geologic features from around the world in class. But you can never really get a full grasp until you see it in person. (Last year, I went on the study abroad to France. Before the trip I came across pictures of a place called Etretat, France. This place looked amazing, it was in Normandy and was on the coast. Etretat had two large cliffs and one had some erosion happen to it, creating a n-shaped cliff. The pictures on the internet do not do it justice.)


As we continued down through the mountain valleys we saw a great variety of plant and animal life. In the cloud forest we got to see some really cool trees called silver trees. These trees were different because when you look down on them they look silver but the closer you get, the greener they are. This was very interesting to see because they looks like a metal tree from a distance. It is also something we do not get to see back home. We also saw a great variety of hummingbirds in the hummingbird reserve at the end of our ride. These hummingbirds were very colorful and stood out like color on a blank canvas. All of the hummingbirds we saw are indigenous to the cloud forest region of Ecuador. There were also animals we did not get to see because they stay away from the roads, including bears, wild pigs, monkeys, pumas, jaguars. We then had lunch in Condiapa outside of a small convenience store. To really understand where we were, this convenience store was on the side of the road amidst a fortress of surrounding mountain peaks. That road probably does not get a lot of traffic.

In the end, it is an experience that we will never forget. Getting to see a great variety of plant and animal life while mountain biking down a volcano through a forest makes for a great day. That was a day to remember, and a trip of a lifetime.